Pterois Volitans, the Lionfish is quite an amazing creature. The colouring of one of them includes white, beige and brown. The Lionfish is part of the Scorpionfish (Scorpaenidae) species, which take their name from the venomous spines positioned on the dorsal fin.

The Two-spot Lizardfish is usually found within the depth range of 1 – 10 meters. The maximum recorded length of a Two-spot male lizardfish  is about 18 cm, but the common length is around 10 cm. 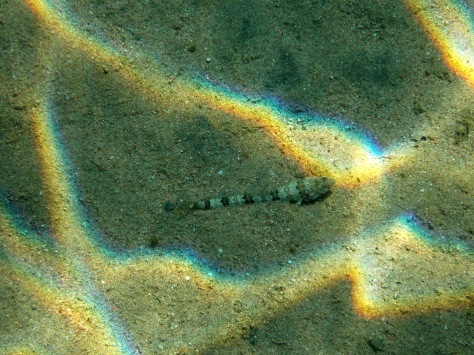 The Boxfish (Ostraciidae) is certainly one of my favourite fish. It is also called Cofferfish, Cowfish and Trunkfish. There are 24 extant species in seven extant genera. The adults are in general quite square in shape, young Ostraciidae are more rounded. The young often exhibit brighter colours than the adults. 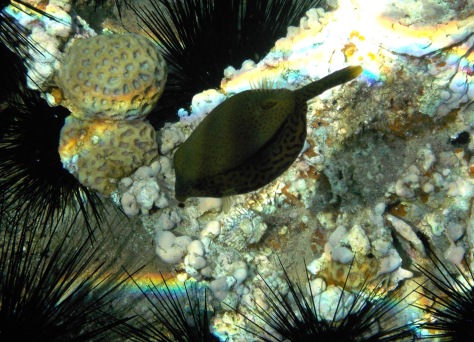 Diadema Antillarum, the Black Sea Urchins, were all over the bottom of the Red Sea in Jordan. We had to be very careful not to touch them by mistake. This sea urchin is characterized by its exceptionally long black spines.

When the population of sea urchins is at a healthy level, they are the main grazers, which prevent algae overgrowth of the reef.

The corals in the Red Sea at Tala Bay, Jordan, were a bit different than the ones we had seen in Marsa Alam, Egypt. Less colour, but nonetheless very beautiful and amazing to explore.