My husband had visited Spain and Costa Del Sol many times as his parents had a house in Torremolinos. I myself had only visited Mallorca and the Canary Islands, so the mainland was still on my wish list. This was the reason we chose Spain as our spring break target some years ago.

We flew to Malaga and rented a car. Driving late at night is always an experience, as you can see all the city lights glimmering in the dark. We drove to Estepona, which is about 70 kilometers west from the Malaga airport.

We passed Churriana, Benalmadena, Mijas, Fuengirola, Marbella and San Pedro. They are all cities worth seeing, depending on what you are looking for during your holiday. 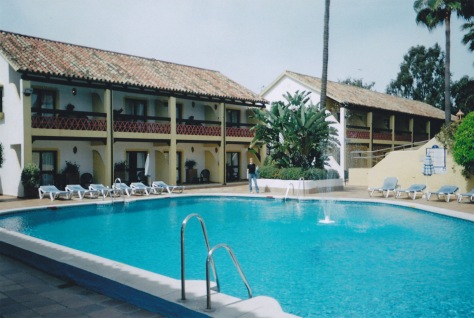 Hotel Diana Park was our choice during this trip, as it situated very close to the A-7. We would drive around every day, so being close to a major highway was preferable. The hotel was actually quite nice though it had only three stars. This neat budget hotel, with an awesome pool, is situated at Carretera De Cadiz Km 168, Estepona, Spain.

It was Easter weekend and the weather was great. After Finland’s cold and snowy winter, Spain’s 16-24 C was awesome weather for us. The sun was shining every day, though not every hour. The day we drove to Ronda, it was partly cloudy and some light rain occurred for one hour, but that did not matter at all.

We decided to visit Gibraltar and drove towards La Linea (de la Conception). It has a history of being the place where many illegal immigrants enter Spain. La Línea is a major supplier of fruit and vegetables to Gibraltar; other industries include the manufacture of cork, liquor, and fish paste. It also had an important military garrison with substantial fortifications and a port. La Línea has 14 kilometers of beaches, named La Alcaidesa, Santa Barbara, El Burgo Sobrevela, Portichuelos and Torrenueva. Some have been are awarded each year a blue flag by the Coastal European Authorities.

La Línea made headlines under Araujo’s Socialist predecessors in the 1980s and 1990s, when it was dubbed a “ciudad sin ley” or lawless city. At the time, drug dealers, smugglers and other criminals made their living in the Andalusian border town. 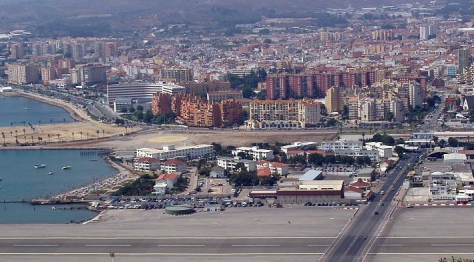 Gibraltar is seen from far away. But it is such a small place – only 6,8 square kilometers and a population of around 30 000. Half of the area is protected area.

Gibraltar is known for the Rock of Gibraltar, which is 426 meters high. The World War II tunnels, the Cable Cars, the Gibraltar Botanic Museum and the Gibraltar Museum are some interesting places to visit during your days in Gibraltar. The subtropical Mediterranean climate with mild winters and warm summers attracts tourists from all over the world. If museums are not what you look for, you can spend the day shopping and visiting different cafeterias, bars and restaurants. 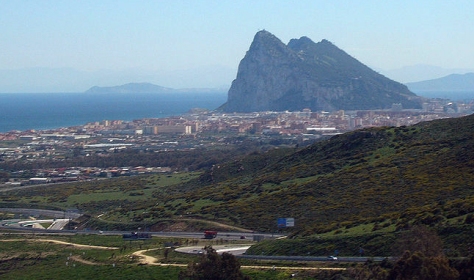 The Official Gibraltar Tourist Board Website tells you in detail what to do and enjoy while staying in Gibraltar. 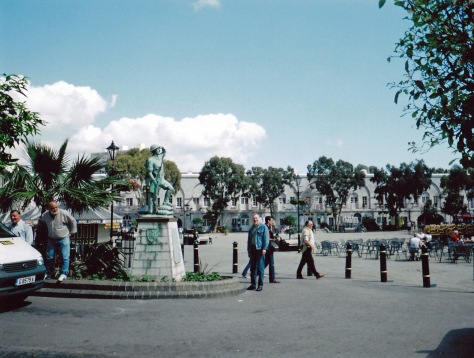 It took us about one hour to drive up the mountains from our hotel to Ronda. Huge green hills surrounded us during the drive and the views were fabulous. When we arrived in Ronda, I thought “what a marvellous town”. The town is situated 750 meters above the sea level.

Ronda is the biggest of the Pueblos Blancos in Andalusia. These “white towns” are small towns from Malaga and Sevilla to Algeciras which are characterised by whitewashed walls and red tiled roofs. 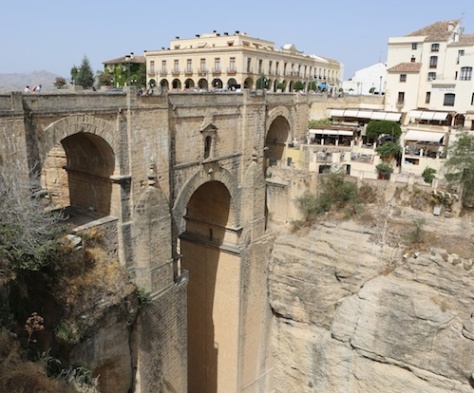 El Tajo canyon in Ronda is so amazing. Ronda was heavily affected by the Spanish Civil War. Chapter 10 of Hemingway’s “For Whom the Bell Tolls”, describing the 1936 execution of Fascist sympathisers in a fictional village who are thrown off a cliff, is considered to be modeled on actual events at the time in Ronda. It is also said that modern bullfighting started in Ronda. 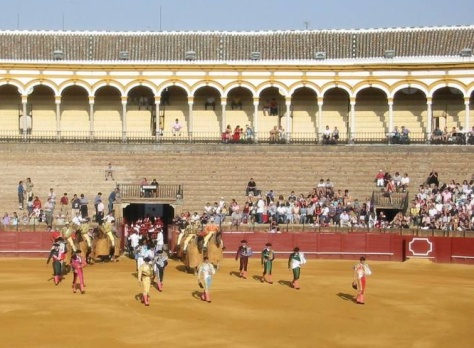 We visited the restaurant of the  Don Miguel Hotel. I can warmly recommend Don Miguel. Excellent food, kind service and awesome view towards El Tajo canyon. The prices are not as high as one would think. Soups start at 5.40€, fish at 12,50€ and the meat dishes at 11,50€.

Three bridges, Puente Romano, Puente Viejo and Puente Nuevo span the canyon. The 120 meter deep canyon split Ronda in two. Therefore the architect José Martin de Aldehuda and the construction manager Juan Antonio Diaz Machuca decided to build a beautiful and strong bridge. The building of Puente Nuevo, the tallest of these three bridges, commenced in 1751. It took 42 years to complete. 50 workers died building the bridge. Beauty has its price. 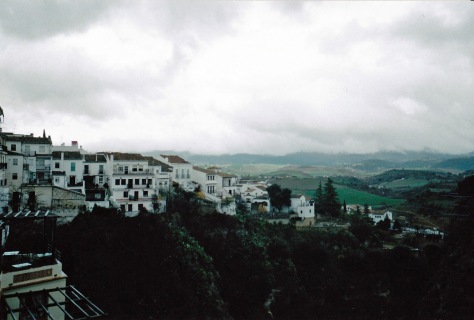